Can the new Mercedes EQA tow. Need an EQA towbar?

There are now a whole host of impressive small electric cars to choose from, but very few of them can claim to be luxurious as well.  In comes the EQA.  It’s based on the Mercedes GLA – but Mercedes’ engineers have yanked the engine from under the bonnet and reworked the car into a fully electric SUV, with a 66.5kWh battery that promises up to 423kms from a full charge.

The Mercedes EQA appears to offer all you could want from an upmarket small SUV: it brings the expected air of quality and refinement, a first-rate cabin and the all-important infotainment and tech systems that buyers demand. Plus, the EQA looks reasonable value, particularly when compared to its painfully more expensive EQC sibling.

The Mercedes-Benz EQA offers a generally excellent driving position, with plenty of adjustment for the seat and steering wheel. Some may find that the steering wheel rim obscures the view of the 10.0in digital driver display (standard across the range), but with such a wide range of adjustment available, there’s a good chance that it won’t be a problem for you.

Meanwhile, visibility is good, with manoeuvring made easier by standard front and rear parking sensors, as well as a reversing camera. There are LED headlights with high beam assist, too, for bright illumination on dark roads.

The driver display is paired with a second 10.0inch screen that handles infotainment, and the two are slickly fused together to give the impression of a single giant widescreen.

It doesn’t only look good, though; in fact, this is one of the best infotainment systems around. It’s the latest generation of Mercedes’ MBUX system, and it can be controlled via the touchscreen itself, through the (quite capable) voice command function, or – crucially – using a trackpad on between the driver and passenger seats. That conveniently-located trackpad (which is augmented by smaller pads on the steering wheel that can be operated with your thumbs) makes this one of the easiest and safest systems to operate while driving.

The other good news is that the impressive tech and attractive design are backed up by very good build quality. The EQA interior is equipped with materials that feel very high in quality.

The EQA’s rear bench has a 40/20/40 split as standard. That’s more versatile than the usual 60/40; it enables you to fold the middle seatback down independently to allow long items to poke through from the boot, or to allow luggage to be accessed from either of the rear seats.

Unfortunately, the EQA disappoints when it comes to boot capacity. At 340 litres, it has 100 litres less volume than the GLA.  The EQA claws some points back by having no loading lip to get in the way when hauling things into and out of the back.  Why not fit an EQA towbar.  Mercedes has rated some of the EQAs models up to 850kgs - check your owners manual.  Our EQA towbar can also be used to carry your bikes along on the next weekend trip.  All "ball" mounted bike carriers are compatible.

We are now taking pre-orders/waiting list for the first batch of Invisible Mercedes EQA towbars coming off the production run in 4-6 weeks. 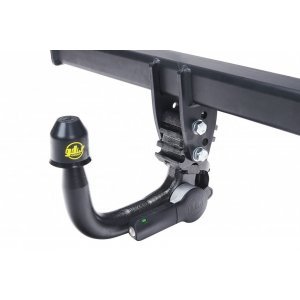